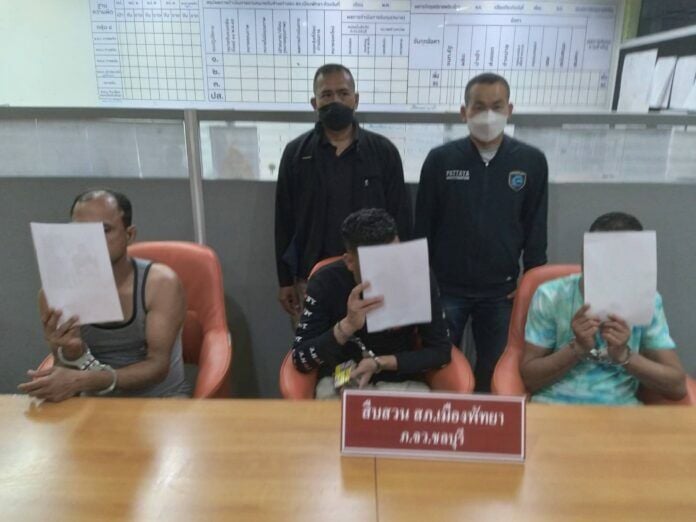 Three men who would have worked together for steal two cell phones of Pattaya guest house were arrested. CCTV footage showed the second and third suspects walking on Pattaya Second Road the night before.

The first and second suspects were also seen heading towards Pattaya Second Road to Pattaya Central Road after leaving the guesthouse.

The first and third suspects were arrested in their rental room at the Panowla residence on Soi 13/2 on Beach Road. They then led police to the second suspect staying at Hotel Lek at Soi 12 on Pattaya Second Road.

Although the suspects admitted they were the people captured in the CCTV footage, they denied the allegations, Pattaya News reported.

The men have been identified as Egyptian nationals. The men are 41 Yasser Zaki Mohamed Ismail, Ali Elasayed Attia Hussein, 46, and Mamdouh Abouamer Badawy, 45.

One of the thieves allegedly snatched the phones while another allegedly asked a member of staff to take him around the rooms. The staff checked CCTV and saw that the cell phones, a 9,500 baht Samsung A21 and a 15,000 baht Huawei Mate 20 Pro, were missing and stolen by one of the tourists.

Siriwan showed the would-be tourists a room on the third floor, but they felt the room was too small and did not book. Siriwan said the tourists left the hotel and she saw nothing strange in their actions.

Then, one of the tourists returned to the hotel yesterday. He did the same and asked Siriwan to take him to visit the hotel rooms.

As Siriwan was taking the tourist upstairs for the tour, his friend returned and stole two cell phones from the hotel check-in counter.

Siriwan checked the CCTV and saw that the cell phones, a 9,500 baht Samsung A21 and a 15,000 baht Huawei Mate 20 Pro, were missing and had been stolen by one of the tourists.

A Mueng Pattaya Police Station officer let it be known that they are on the lookout for tourists. They both wore face masks to hide their identities.