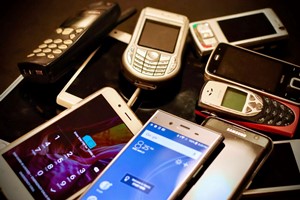 8 things we miss most about our first cell phones | VanillaMore

Whether you have a fancy flip phone or an indestructible Nokia ‘brick’, some of those old phones, especially our first mobile phones, hold a special place in our hearts, with a recent study by Sky Mobile showing that three Britons out of five still have their old handsets. And while smartphones these days can pretty much do anything we want, while becoming as thin and powerful as possible, they have lost some key features that people still feel the nostalgia for today.

By analyzing thousands of Reddit comments, the telecommunications provider Esendex discovered the eight things we miss most about our first cell phones. Here is a little throwback to the past.

Although it was the end of an era for Blackberry users after Blackberry officially retired the use of its software earlier this year, the iconic black phone was known for its QWERTY keyboard, which users appreciated. tactility and the sound of “click-clack”. At its peak in 2009, Blackberry held 20% of the global smartphone market, with its ability to send emails well before the game. And who could forget BBM – Blackberry’s own instant messaging service. The company’s demise was due to a series of factors; Apple’s iPhone and the move to a touchscreen played a big part in this. Despite this, Blackberry retained loyal customers; 21% of Reddit users say they miss the keyboard on their old devices the most, at the top of the list.

Smartphones are essentially mini-computers in our pockets, and while that’s fantastic, it does eat up a lot of battery when we’re streaming music, watching YouTube videos, and listening to podcasts, to name a few features. Our old phones were just phones, used for making calls and texting and because of that the battery on them could last for days, as one Reddit user pointed out: “The only thing I Missing about old school phones would be the seemingly infinite battery life Maybe not quite infinite but the Nokia 3310 battery can last up to a whole month on standby and up to 22 hours talk time One in ten Reddit users say battery life is the feature they miss the most in their first cell phone, while over 17% say the ability to replace the battery is the feature who they miss the most.

For Generation Zers who grew up with iPhones and lived through the rapid evolution of mobile phones, it’s some of the earlier features like Touch ID that they miss the most. When Face ID was first introduced in September 2017, face scanning technology was considered a safer and faster method of unlocking. However, due to the pandemic and the need to wear face masks, unexpected issues have arisen with facial recognition technology. Users could not effectively unlock their devices while wearing a mask. Although this was later corrected, many users find the simplicity of pressing a button and not having to lift the phone up to your face much more efficient and convenient, with nearly 14% of users Reddit stating that they would rather go back to Touch ID.

Smartphones today seem to be optimized to the max and can seemingly do it all, but this has made them all quite similar. Gone are the days of flicking your wrist on a flip phone to answer a call or slamming it to hang up on someone, which was reflected in Esendex’s research; 11% of users miss the satisfying feeling of ending a call with a flip phone. But for those missing the quirkier designs, you might get lucky with newer versions looking to stand out from the crowd, like the Samsung Galaxy Z Flip 4, which can be folded in half. However, it remains to be seen if they can be closed and not fall apart like the old ones.

Most smartphones these days use tempered glass screens, offering excellent image quality and responsive touch, a clear step up from their predecessors. But where modern technology breaks down is how easy it is to scratch or worse, crash, leaving you with an expensive repair bill or having to shell out for a brand new phone.

This wasn’t much of an issue with older phones, as one Reddit user pointed out: “My old Nokia still works after being dropped down the stairs a few times. I think it can be made from human bones. Nearly 10% of Reddit users said they miss the durability of their old cell phones the most.

When Apple first removed the headphone jack in September 2016, only allowing their headphones to connect through a USB-C port, people were angry because they needed an adapter to plug in their favorite headphones. It seems that by now many Apple users want to see the return of the headphone jack, with nearly one in ten users saying it’s what they miss the most. There are still phones with headphone jacks available in the market, but with wireless headphones becoming more and more popular, it looks like the headphone jack will soon be a thing of the past.

Despite the fact that our phones allow us to stay connected at all times, many are nostalgic for the days when our phones were just phones. There was no such thing as Facebook, Instagram, Snapchat, Tik Tok Where Twitter, and no instant messaging with notifications at any time of the day. Nearly 5% of users said they are not addicted to their mobile phone and feel pressured to be available 24/7.

Some phones are now made for the sole purpose of gaming, like the Xiaomi Black Shark 5 Pro, which performs just as well as handheld consoles like the Nintendo Switch. Most phones on the market are capable of streaming multiplayer games online and even have the ability to connect to console controllers. Despite this, the nostalgia people feel for classic games due to their simplicity cannot be understated, with Snake coming in at #8 on the list.

Esendex analyzed thousands of comments in 13 different Reddit forums, discussing which features people miss the most on their first mobile phones. The number of comments and upvotes on those comments was added to determine a top eight list.